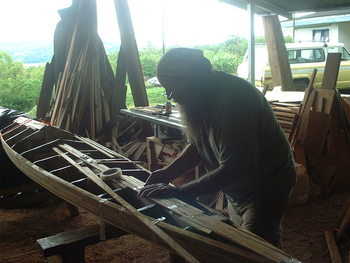 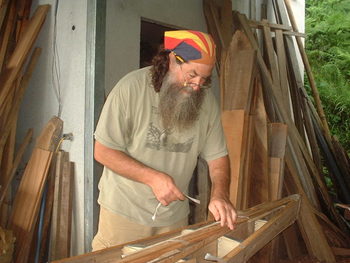 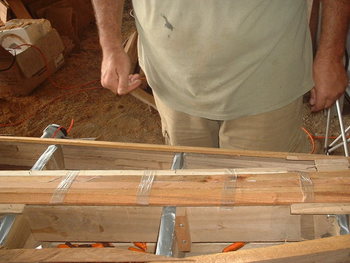 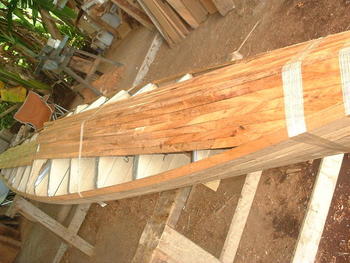 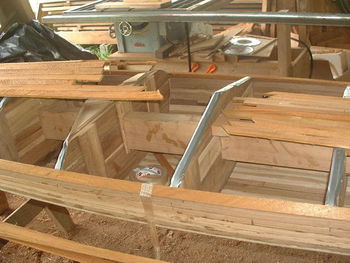 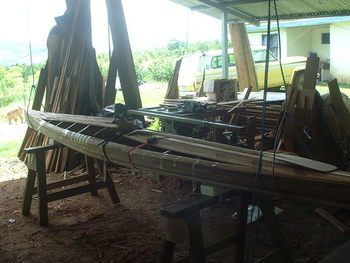 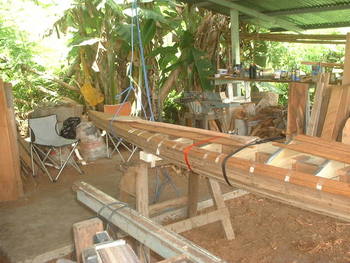 Deck stripping has been excrutiatingly slow. Not able to use staples on the deck wood. The espevel is harder than laurel and the staples don't penetrate. The guapinol is just too hard. Not sure a staple would even leave a scratch! All that means is that a typical day allows application of 2 strips, one on each side. Some days I've been able to put a second effort in so 4 strips in total. Otherwise it's wait until the next day for the glue to set.

Having to use more creative means to clamp strips into place. The fiber tape that I found is coming in real handy for this effort. Holds the strip tight to the previous row while I use a standard clamp to hold the strip to the form. Also discovered that this band clamp I've had for years is finally becoming useful. Cinching down around the entire boat is helping to keep the strips against the forms. Not only that but I've found use for some nylon web straps that've been kicking around the shop for a long time. First I clamp down with the band clamp, then I can put the web strap around. It holds that location so I can move the band clamp to another point that needs help. Even started using the straps that hold our rental kayaks to the roof of the truck. Just can't have too many clamps for a project like this.

Okay, enough drivel, on with the photos! But first, during this period the Arenal Boatworks received its first actual paying project. Look here to read more about that.

Here's the collection of photos taken during the deck buildup. As I write this update the deck is actually finished but it was a dark and dreary day yesterday and not a good photo opportunity. Hopefully we'll have a chance to get some today and put those up.

Coupla side notes. A friend from down the lake a ways, John, builder of Toad Hall, stopped in one day with an interesting book. An illustrated guide to the woods of Costa Rica! Cool! Now I have a reference to some of the woods I've used as well as information on woods that I might want to use. And not only that but I can now spell them. For instance, what I thought people were calling ispevel is actually espevel. Must have either picked up the wrong inflection on that one or the people I heard it from were saying it wrong. The other one I should've known but most likely subconciously applied my english spelling to is guapinol, not guapinole as I'd been writing it. The e would've been heard on the end if it was there.

The other item I wanted to mention is the deck pattern. You might have caught a glimpse of it in one of the pictures but probably didn't get enough to know there is a design let alone what it might be. Well, it's supposed to be an arrow. The bow has the arrowhead, a shaft runs down the middle, and there are fletches on the rear deck. Kind of abstract, especially the arrowhead but there you have it. You can see the fletches in one of the photos but the arrowhead doesn't stand out yet unless the wood is wet down some. Guess you'll just have to wait until the finish is done before seeing the pattern in all of its glory.

Been thinking a lot about the next boat. Since there are no orders yet, (hint! actually there are several potential customers but I think they're waiting to see if this one floats...) the next one will be for Beth to use on the lake. She is our tour guide when we rent our boats unless there is a full house. The idea is that she can show people where to look for wildlife, views of the volcano, and other scenic or interesting places (plus reduce our exposure to liability). But she doesn't want a 17' boat. Our rentals are around 11' long and very maneuverable so that's the first design criteria. Downloaded a free program for kayak design and started playing with it to see what might be possible.

What I'd like to do is make something that is very much like our sit-on-top plastic kayaks. People like them because they're stable and it's possible to get in and out of them from the water. But replicating that design in a stripper is difficult to impossible in some cases. I've come up with some ideas, however, that would get something that is close enough and would retain some of the features we like.

The reason I'm thinking about the next boat already is that I could fill a fair amount of down time when I can't work on the Great Auk. While waiting for glue or fiberglass to dry I could be adding strips to the next boat. Almost like production! Yes, we are serious about building as many of these boats as we can. Order early and order often...