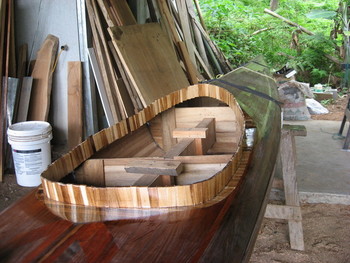 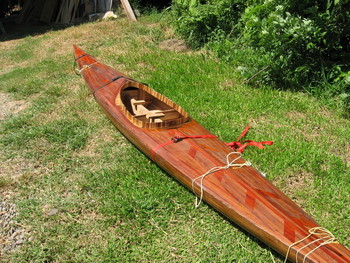 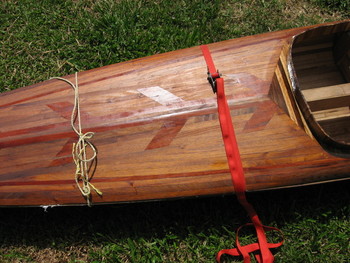 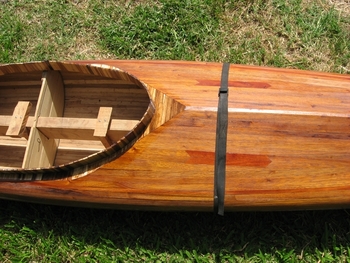 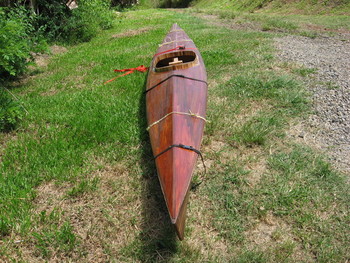 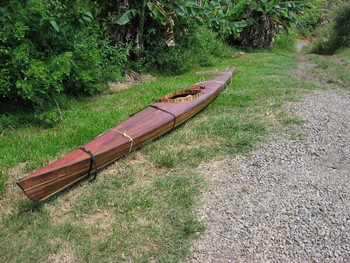 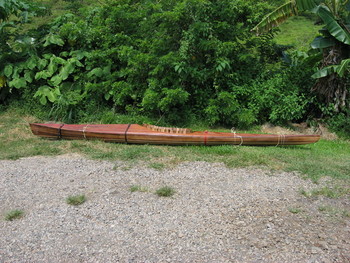 Been dragging my feet on the cockpit coaming. Mainly because I didn't have any useable strips leftover which meant I'd have to cut some more just for that. What was really necessary was getting the sealer coat on the boat. I'd been getting some water sitting on it from rain and condensation so before there was permanent damage it was more important to get the wood sealed.

The top was already sealed and ready for fiberglass but the coaming needed to be there so the cloth from the top deck continues up the coaming. This'll add strength to that area which takes a lot of stress when entering and exiting the kayak. It's also a convenient carry point so not a place to sacrifice any strength. Sorry, didn't get any photos of the sealer coat going onto the top deck so this'll be the first look at it.

Once the glass is wrapped up the outside of the coaming it'll be time to put the lip around. This'll be a series of laminated pieces going completely around the upper edge of the coaming. The purpose of all this is to have something to attach a spray skirt on so the big waves don't swamp the boat. Not usually an issue on Lago Arenal but there are times when the waves out there are pretty serious.

On to the bonus photos. Decided it was time to get some sunlight on the thing and see what difference it makes. This'll also be a good look at the top since applying the sealer coat of resin. I was surprised at the resulting colors in the shade of the shop compared to out in sunlight. The differences in the wood really come out in the sun where they were somewhat subdued in the shade and I wondered if the design features would be noticeable. Judge for yourself.

You'll notice that the form is still inside. It'll stay there until that first coat of cloth goes on the top. After that I don't have to worry as much about the wood losing its shape. Unless there's another extended delay then I'll be done with the form in a couple of days. Actually, I have only a couple of weeks of steady work to get the thing ready for the water. Once the glass goes on the outside of the deck the next effort is sanding and glassing the inside. Then it's just a matter of attaching the two halves together and it'll be seaworthy. Will still need varnish for UV protection but the boat is essentially done at that point. There'll be some time and effort put into some deck rigging, foot rests, a seat, and a paddle so the saga is far from over. Stay tuned.