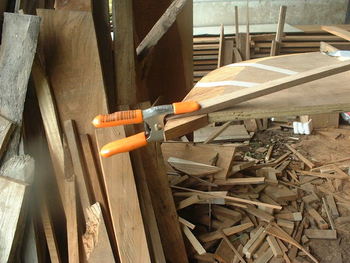 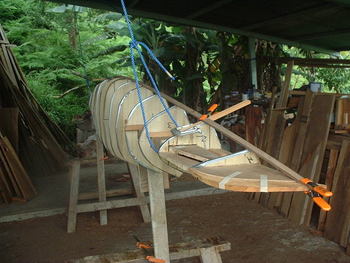 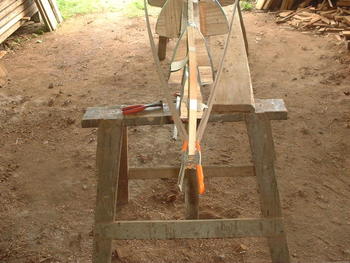 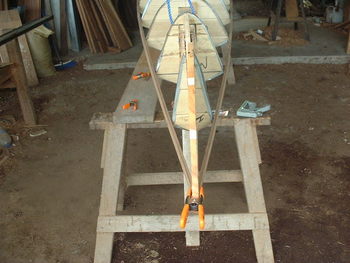 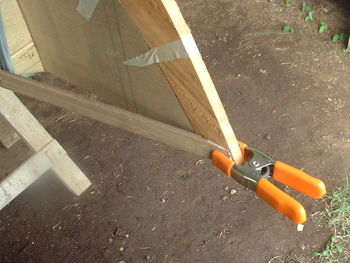 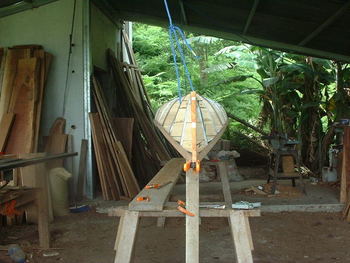 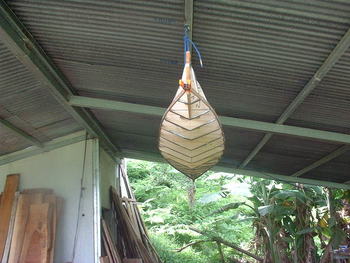 Spent several days finishing preparations on the forms. Needed to cut the stem pieces for the bow and stern first. The book says these "internal" stems are to be tapered with the strips coming to a point on the outside of them hiding the stem piece. As I mentioned earlier, I wanted these to show so I didn't taper them. Here's a photo that shows my unproven technique for the ends. The stem pieces are cut from some guanacaste scrap that happened to be the right thickness.

The other major task on the forms was to check and adjust alignment. Turned out there was a fair amount of truing required to get the keel straight which to me is the most important. A look at the deck verified that it was also running true so the next step was to apply tape to the forms to keep glue from sticking.

So, here we go to the first strip on the sheer line!

Was easier to work on this first strip with the form laying on its side. Once that was accomplished on both sides I went ahead and placed the strongback into the slots in my stands clamped to sawhorses. The clamp to the sawhorse method is working for now but I'm thinking it'll need some refinements as work progresses. Maybe a slot in the top of the horse and another slot below which would allow for easy removal but provide additional stability.

The book suggested using a single strip the length of the boat for the first strip at the sheerline. So I did that the day before scarfing 3 pieces together using through scarfs to make a 18' or so strip. Was a challenge working with an 18'x3/4"x1/4" piece but I was able to get both ends cut to fit and glued on.

The photos on the left show the stern and bow with the strongback now placed in its proper location. That is, the boat is hull up, deck down, or upside down if you will.

So that was it for the first day of stripping. Wanted the glue to dry where the strips contacted the stem pieces so pulled the boat up to its home above the truck.