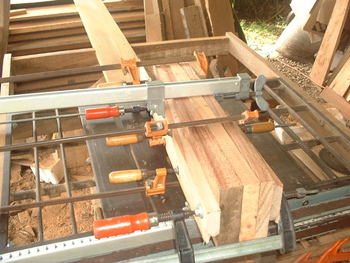 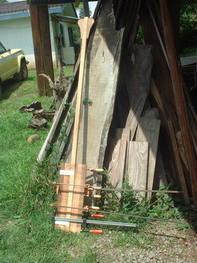 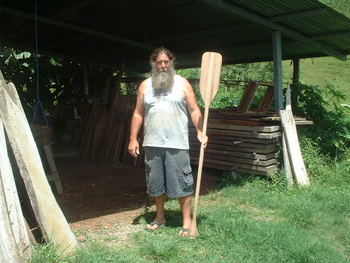 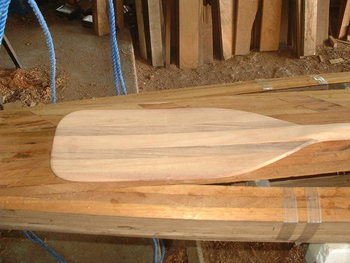 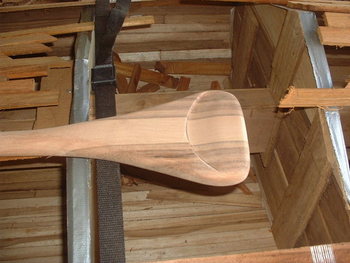 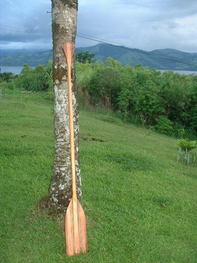 The boat shop has an order! Yes, a fairly recent resident of the area, Captain Ron, who is operating a new fishing tour company on the lake stopped in the other day. He was asking about where to look for a paddle for his boat. Most people with power boats have a paddle or oar in case of engine failure and fishermen like to have a paddle to get in and out of tricky spots. Of course I mentioned that I would be building kayak paddles and maybe what he wants is something similar. His idea was that he wanted a double ended paddle so he could sit on the bow and paddle with both ends. After some discussion and talking to another fisherman, it was decided that a single bladed paddle would be best and I got the order.

Of course I've been studying Nick's technique along with several sites on the web and was ready to give it a try. First off was gluing up the blank for the blades. I used cinecero, guanacaste, and cedro amargo for that and you can see the glue up in the 1st photo.

Next consideration was building the shaft. Should I use one piece or laminate? Lamination increases the strength but I was also concerned about weight and glue does add some weight. Also I don't have what is considered waterproof glue just weather-resistant. So I pulled out a piece of 1-1/2" cedro amargo that was a little over 6'. After jointing one edge and ripping a piece out of the board it immediately took on a curve. Typical behavior for cedro amargo. Figured since the blade would have a slight curve I can bias that with the curve in the shaft so didn't try to make it totally straight.

Made the little marker gizmo that Nick used to mark out parallel lines down the shaft. These are used later in the rounding process. After that it was time to shave off some waste and glue the blades on. Of course I'd previously taken the blade blank over to my buddy's shop and cut the blades out with his bandsaw. Once the blades had set up for a couple of days I glued on some pieces to form the handle and let that cure.

Eventually it was time to sculpt the paddle into final form. This involved using my 8" angle grinder, belt sander, plane, spokeshave, and 4" angle grinder. The shaft was the hardest part and it doesn't have uniform roundness but it all came out looking rather nice. And light! After 4 coats of marine varnish it's looking pretty and we have our first happy customer for the boat shop.